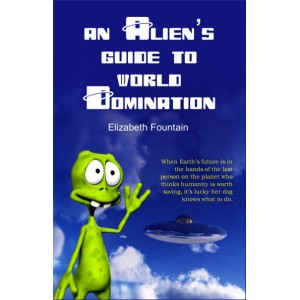 My first novel, “An Alien’s Guide to World Domination,” came out this spring from BURST! Books, an imprint of Champagne Book Group. In 2008, when I started writing the story that became this urban science fiction yarn populated with aliens, dogs, humans, and a company that makes really bad plastic gadgets, I set about crafting a realistic tale of a woman who worked too much.

Did that last description make you yawn, just a little? Me too. The story bored me, and I crept closer and closer to giving up. Then a conversation with a good friend sparked a dream, and the dream showed me the story needed to be set in a different world – one with stupid but brutal aliens, long-lost exiles from other planets, and spunky dogs from Mars.

Suddenly the story came to life, and I began to explore the ways science fiction and fantasy tell truths about our all-too-human lives, sometimes better than realistic fiction can.

Unconstrained by realism, an incompetent boss can shed his too-small human skin, and reveal his true nature as an alien the color of lime Jell-O ™ gone horribly wrong. In reality, the skin might stay on, and the lime green might remain in our imaginations, but we all know the feeling of having a boss so out of touch he must be from another planet.

Unconstrained by realism, a shadowy cabal of government bureaucrats can plot to rid itself of unwanted citizens – orphans and old people – by sending them into interplanetary exile. In reality, we might not travel thousands of light years, but we know the feeling of being so far from home, we might as well be aliens ourselves.

I love all kinds of fiction. Good storytelling compels me to follow it, through realism or fantasy, while I learn more about myself, about what it means to be human, about how to get along on this crazy, wonderful planet we call home. One of the special joys of science fiction and fantasy is finding authors whose creativity gives shape and form to our dreams, nightmares, and deepest truths, unbound by the laws of nature. The people we know who seem to survive by sucking life from others? Vampires. The times when our own anger or primal instincts overwhelm our reason? Werewolves under a full moon. The temptation to slog through life unaware, unfeeling, unconnected? Zombie horde. The experience of walking into a party where everyone else seems to share a different language? The aliens’ bar in Star Wars.

Although much of science fiction and fantasy explores the dark, it also gives us the glorious opportunity to step back from taking ourselves too seriously. Even if vampires, werewolves, zombies, and aliens create terror, they also offer a new perspective, a bit of distance from reality, and often a way to laugh (at least a little) at our own dark sides, once we close the books and return to our “real worlds.”

Now, I’m writing a book for younger readers. In this tale, a crack team of misfit computer and math geeks is close to completing the mathematical formula for the Law of Immediate Forgiveness. If they succeed, the world will be free from war, violence, and suffering; so it’s no wonder so many people want to stop them. Young Amy June Pilgrim finds herself in the middle of their quest, guided by her grandfather and Licky, the goofy black Lab who lives up to her name. In reality, is there a formula for forgiveness? What would we do if we had one? Would we use it, like this team wants to, or would we be too afraid that forgiveness only opens us up to new hurts? These are some of the questions I get to explore in this story. Oh, and the black Lab gets to foil a kidnapping with a nice, stinky dog fart – the joys of writing for kids!

What do you think – do you love science fiction and fantasy because these stories tell deep truths, while they delight, frighten, intrigue, and entertain us?

To Learn More about Liz’s Books, Check Out:

To Purchase An Alien’s Guide to World Domination, you can find it at:

Burst, Amazon, and other online retailers.

One response to “On Writing – Guest Post with Liz Fountain”